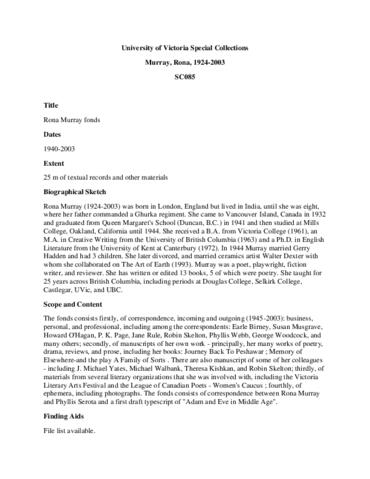 25 m of textual records and other material

Rona Murray (1924-2003) was born in London, England but lived in India, until she was eight, where her father commanded a Ghurka regiment . She came to Vancouver Island, Canada in 1932 and graduated from Queen Margaret's School (Duncan, B.C.) in 1941 and then studied at Mills College, Oakland, California until 1944. She received a B.A. from Victoria College (1961), an M.A. in Creative Writing from the University of British Columbia (1963) and a Ph.D. in English Literature from the University of Kent at Canterbury (1972). In 1944 Murray married Gerry Hadden and had 3 children. She later divorced, and married ceramics artist Walter Dexter with whom she collaborated on The Art of Earth (1993). Murray was a poet, playwright, fiction writer, and reviewer. She has written or edited 13 books, 5 of which were poetry. She taught for 25 years across British Columbia, including periods at Douglas College, Selkirk College, Castlegar, UVic, and UBC.

The fonds consists firstly, of correspondence, incoming and outgoing (1945-2003): business, personal, and professional, including among the correspondents: Earle Birney, Susan Musgrave, Howard O'Hagan, P. K. Page, Jane Rule, Robin Skelton, Phyllis Webb, George Woodcock, and many others; secondly, of manuscripts of her own work - principally, her many works of poetry, drama, reviews, and prose, including her books: Journey Back To Peshawar ; Memory of Elsewhere-and the play A Family of Sorts. There are also manuscript of some of her colleagues - including J. Michael Yates, Michael Walbank, Theresa Kishkan, and Robin Skelton; thirdly, of materials from several literary organizations that she was involved with, including the Victoria Literary Arts Festival and the League of Canadian Poets - Women's Caucus ; fourthly, of ephemera, including photographs. The fonds consists of correspondence between Rona Murray and Phyllis Serota and a first draft typescript of "Adam and Eve in Middle Age".