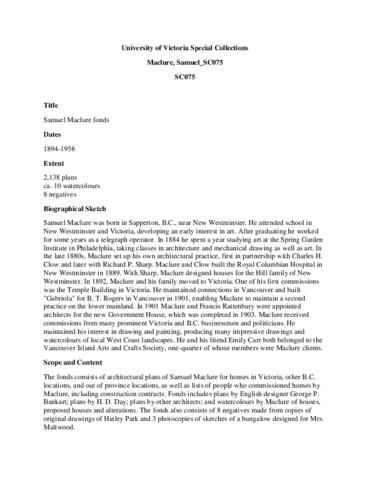 Samuel Maclure was born in Sapperton, B.C., near New Westminster. He attended school in New Westminster and Victoria, developing an early interest in art. After graduating he worked for some years as a telegraph operator. In 1884 he spent a year studying art at the Spring Garden Institute in Philadelphia, taking classes in architecture and mechanical drawing as well as art. In the late 1880s, Maclure set up his own architectural practice, first in partnership with Charles H. Clow and later with Richard P. Sharp. Maclure and Clow built the Royal Columbian Hospital in New Westminster in 1889. With Sharp, Maclure designed houses for the Hill family of New Westminster. In 1892, Maclure and his family moved to Victoria. One of his first commissions was the Temple Building in Victoria. He maintained connections in Vancouver and built "Gabriola" for B. T. Rogers in Vancouver in 1901, enabling Maclure to maintain a second practice on the lower mainland. In 1901 Maclure and Francis Rattenbury were appointed architects for the new Government House, which was completed in 1903. Maclure received commissions from many prominent Victoria and B.C. businessmen and politicians. He maintained his interest in drawing and painting, producing many impressive drawings and watercolours of local West Coast landscapes. He and his friend Emily Carr both belonged to the Vancouver Island Arts and Crafts Society, one-quarter of whose members were Maclure clients.