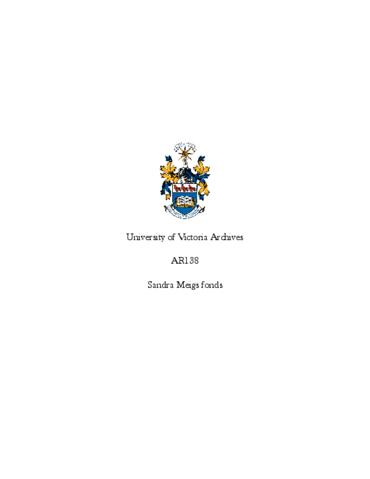 Sandra Meigs is an artist and professor of visual arts at the University of Victoria, and has held previous appointments at the University of Toronto, Georgian College, York University and the Ontario College of Art. Meigs was born in Baltimore, Maryland in 1953. She attended the Rhode Island School of Design, holds a Bachelor of Fine Arts in Mixed Media (1975) from the Nova Scotia College of Art and Design, and a Master of Arts in Philosophy (1980) from Dalhousie University. Her master’s thesis is entitled Universalization and Respect for Persons. She has taught in UVic’s Department of Visual Arts in the Faculty of Fine Arts since 1993, and also served as departmental chair from 1997 to 2002. Meigs’s major areas of interest are painting and art theory.

Meigs was profiled by Sarah Milroy in the article “Eminent Victorian: Sandra Meigs and the sculpture of painting” (Canadian Art, Summer 2010). Milroy situates Meigs strongly within a challenging experimental tradition in Victoria's art scene that has emerged to contest the photo conceptualism found in Vancouver. Meigs, informed by popular culture, art history, architecture and psychology, creates works described as narrative, gothic, comic and ontological. Milroy observes that the paintings of “The Fold Heads” blur the line between painting and sculpture, with three dimensional elements, such as fabric, emerging from the canvas. Meigs herself describes the works as “getting into that space between the viewer and the picture plane.” In Border Crossings (December 2009) Josée Drouin-Brisebois notes the works in “Strange Loop” – interiors rendered in light grey and white on dark grey backgrounds – were inspired by the mansions of Meigs’ birthplace of Rhode Island and address the notion of separated public and private domestic spaces.

Sandra Meigs is represented by the Susan Hobbs Gallery, Toronto.

Donated by Sandra Meigs to the University of Victoria Archives in 2008.