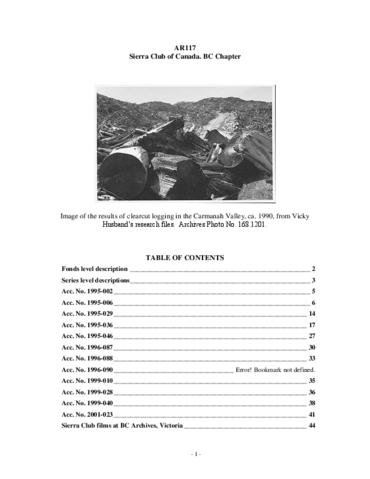 Sierra Club of Canada, B.C. Chapter has been active in B.C. since 1969 when it began as a small grassroots group dedicated to protecting the forests and lakes of the Nitinat Triange and West Cost Trail on Vancouver Island. In 1969, the group joined forces with Sierra Club (U.S.) to form the Sierra Club Western Canada Chapter. In 1989, when the Sierra Club of Canada was formed, the B.C. group was renamed the B.C. Chapter, one of five Canadian Chapters. From the beginning, it has been a democratic, grassroots organization dedicated to the conservation of British Columbia's natural legacy. The purpose of the club is to explore and protect the wild places of the earth; to practice and promote the responsible use of the earth's ecosystems and resources; to educate and enlist humanity to protect and restore the quality of the natural and human environment; and to use all lawful means to carry out these objectives.

The BC Chapter has had many successes, including: protecting the Nitinat Triangle on Vancouver Island; bringing international focus to Clayoquot Sound, now a model for change in community and First Nations management of our forests; leading the way for protection of over 70,000 hectares of ancient forests on Vancouver Island, including Carmanah, Tahsish and Tsitika/Robson Bight; ensuring that forest practices and policies be legislated; encouraging the creation of 156 new parks in B.C. including the Stein Valley, the Northern Rockies and Tatshenshini; using GIS mapping and satellite imagery to identify and help protect B.C.'s ancient coastal rainforest; negotiating moratoriums to prevent the destruction of pristine ancient forest valleys in B.C.'s Great Bear Rainforest; preventing destructive mining practices in Northern B.C.; securing a moratorium on fishing endangered Coho salmon stocks; successfully stopping the development of a coal burning power generation plant on Vancouver Island; and stopping the logging of Vancouver Island's Forest Ecosystem Networks (FENS).