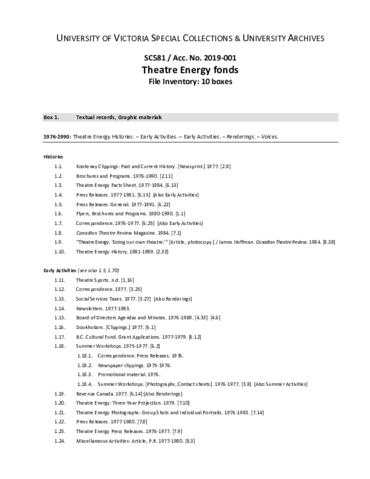 3.25 m of textual records and other materials

Theatre Energy, 1976-1993, was a prominent, innovative theatre collective in the West Kootenay area of British Columbia. Centred originally in the Slocan Valley, it was founded in the spring of 1976 when a small group of local actors, who had been staging amateur productions of published plays, decided to “do theatre in a bigger way, to making our own plays.” They began by offering a series of community summer workshops, utilizing the skills of local and outside resource persons, notably Ronnie Gilbert who had been a member of Joseph Chaikin’s Open Theatre Company in New York and Buzz Bense who had worked with Tamahnous Theatre collective in Vancouver. Both became active members of Theatre Energy.

The original company consisted of eight members operating as a theatre collective whose mandate was to make theatre “by, for and about the Kootenays,” creating their first work, Renderings, with stories and images from their direct experiences of living in the Slocan Valley. This was followed by works of local histories such as Voices, Now and Then in the Kootenays (tales of settlement of various peoples in the Valley), which had a number of incarnations as a touring show to high schools, and a number of locally inflected works. These included Muck Millie Virgil (open and non-monogamous relationships), Powerplay (exploitation of local natural resources), The Girls Will Be Out in a Minute (Kootenay women from historical and contemporary periods), and The Food Show (issues and celebrations of food). Eventually the Company began to include non-original, published plays beginning with Waiting for Godot and The Threepenny Opera in the early 1980s.

Through much of their production history, Theatre Energy members typically toured shows throughout the East and West Kootenays, as well as the Okanagan, and with occasional forays into the Cariboo District and Vancouver. These included school performances of the theatre-in-education, audience participation plays Project Immigration and Calling the Play. The company ceased operations in the mid-1990s.