The collection consists of mimeographed scripts for two plays presented by the club at the Empire Theatre, Calcutta, India. The scripts come from the plays' original productions in England, several years earlier. Also included are programmes for the two plays, a clipping containing a review of one play, and a rehearsal list for the other play. The two plays are “Murder on the Second Floor” by Frank Vosper and “The Wind and the Rain” by Merton Hodge.

The fonds includes a scrapbook of clippings and photographs re The World of W. B. Yeats centenary celebration. Also includes theatre programmes from the UK, US and Canada; printed material from the Charles Lamb Society; architectural plans, specifications and related correspondence for an addition to a house on Madrona Drive, North Saanich, B.C. 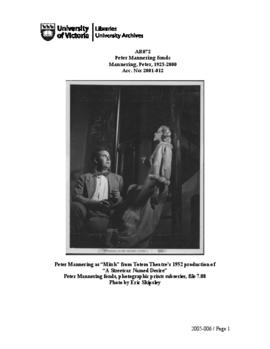 The collection consists of a scrapbook containing theatre programmes of plays, in which the Green-Armytages appeared, and clippings. The clippings are concerned with: Roman Catholicism, mostly about the"Catholic Controversy" of 1913; the works, career, and trial of Oscar Wilde together with the subsequent career and trials of Lord Alfred Douglas. In addition, there is a small amount of material concerning Hilaire Belloc. Included are two clippings of Belloc poems, a handwritten letter from Belloc to the Bishop of Clifton, two handwritten letters from the Bishop of Clifton to R. N. Green-Armytage, and two handwritten letters from Belloc to Green-Armytage.

The collection consists of a handwritten postcard to Moira (Troup), a former employee of the McPherson Library, University of Victoria. It is signed “Tiff”. In addition, there are two theatre programmes, which feature both Troup and Findley in the respective casts: Crest Theatre Foundation (Toronto) production of The Entertainer by John Osborne, and The Straw Hat Players (Port Carling) in Escapade By Roger MacDougal (Findley also directed), plus a hc from “Tiff”.

The fonds consists of records documenting the administrative and operational activities of the Victoria Gilbert and Sullivan Society including general business files, correspondence, financial records, publicity, documentation of the planning and presentation of performances between 1987 and 2016, and related media such as programmes, photographs, and audio-visual material.