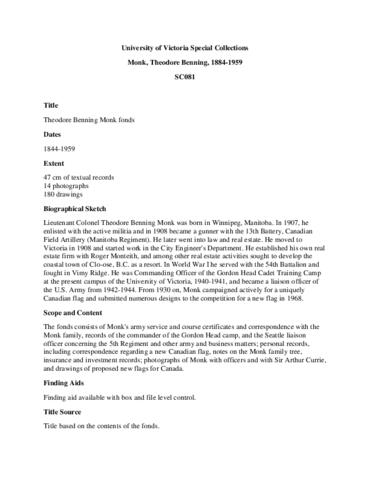 Lieutenant Colonel Theodore Benning Monk, well-known Victoria soldier and realtor was born in Winnipeg in 1884. In 1907 he enlisted with the active militia and in 1908 he became a gunner with the 13th Battery, Canadian Field Artillery (Manitoba Regiment). He turned to law when defective eyesight barred him from the permanent army then left that as "tedious". He followed his next employer to Victoria in 1908 and started work in the city engineer's department. His real estate career started with Pemberton & Sons, but he soon founded his own firm with Roger Monteith, which was responsible for forming several sub-divisions. He also was interested in developing Clo-ose as a resort area, but a change in the government planning halted the scheme. In the First World War he started service with the 54th Battalion, and fought in Vimy Ridge. Working between the wars as a realtor, he became Commanding Officer of the 5th Regiment. He was Commanding Officer of the Cadet Training Camp on the site of the present campus from 1940-41. After his Gordon Head post he became a liason officer of the U.S. Army from 1942-44. From 1930 until his death in 1959 Colonel Monk campaigned actively for a uniquely Canadian flag: designing flags, writing to M.P.'s and appealing to the general public.

Monk's papers were presented to The University of Victoria Special Collections by David R. Monk through the offices of Dr. Reg Roy in August 1978.