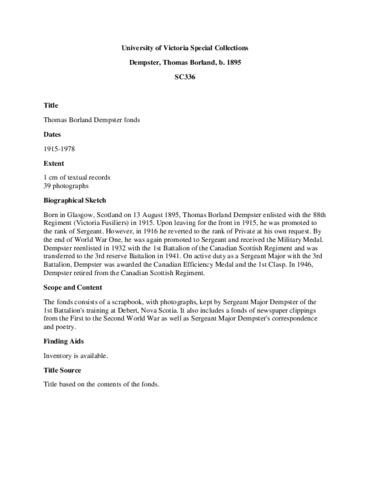 Born in Glasgow, Scotland on 13 August 1895, Thomas Borland Dempster enlisted with the 88th Regiment (Victoria Fusiliers) in 1915. Upon leaving for the front in 1915 he was promoted to the rank of Sergeant. However, in 1916 he reverted to the rank of Private at his own request. By the end of World War One he was again promoted to Sergeant and received the Military Medal. Dempster reenlisted in 1932 with the 1st Battalion of the Canadian Scottish Regiment and was transferred to the 3rd reserve Battalion in 1941. On active duty as a Sergeant-Major with the 3rd Battalion, Dempster was awarded the Canadian Efficiency Medal and the 1st Clasp. In 1946, Dempster retired from the Canadian Scottish Regiment.