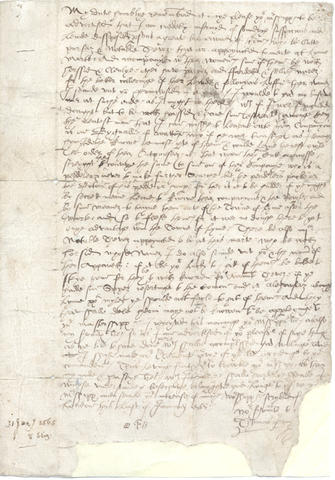 The file consists of a handwritten letter to Paston from Thomas Jermy dated 31 January 1565. The letter has been repaired, with a slight loss of text. Also included are a photocopy of the letter; a typed transcription of the letter, made in 1974 by H.L. Douch (Curator of the Royal Cornwall Institution) and amended at the suggestion of Jean M. Kennedy (City and County Archivist, Norwich), together with comments by Kennedy and Dorothy Sweet; a handwritten transcription of the original, by Douch; handwritten notes and background material by Sweet; two typed, signed letters to Sweet from Kennedy. Sir William Paston was sheriff of Norfolk and Suffolk in 1565-1566. He was the head of the family of which earlier members wrote the well-known Paston Letters. He founded the Paston Grammar School at North Walsham, where he has a magnificent tomb.