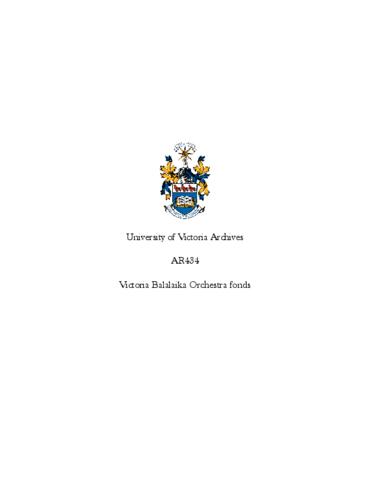 20 cm of textual and photographic records

The Victoria Balalaika Orchestra (VBO) was a Slavonic music group based in Victoria that existed from 1973 to 2008. The group was founded by Dr. Nicholas Galichenko, a faculty member in the Department of Germanic and Russian Studies at the University of Victoria who has written several books on cinema. The group originally performed using instruments primarily from Galichenko’s personal collection, and played its first concert at the University of Victoria in 1974 under the direction of Anton Kolstee. From 1975 to 1981 Robert Van Mari directed, from 1981 to 2001 Tony Booker directed, and from 2001 to 2008 Mary Clarke directed. The VBO released three albums: Victoria Balalaika Orchestra (1981), Echoes of Russia (1991) and Give Me Balalaika (1998). In 1986, the VBO performed at Expo ’86 in Vancouver. The group had ties to the Victoria Ukrainian and Russian communities and regularly performed in events organized by each.