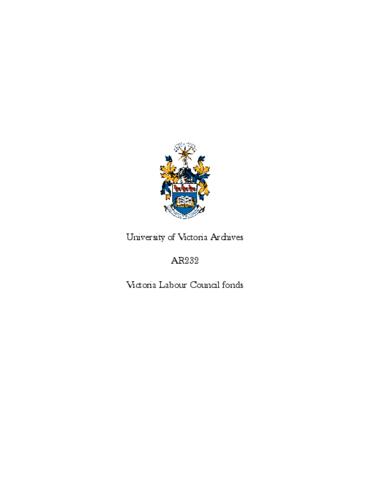 The Victoria and District Trades and Labour Council (VTLC) was established in 1890. Its first union locals were the Typographical Union (ITU), ship carpenters, bricklayers, carpenters and moulders; painters and decorators joined soon after, while other locals joined over the years, including pressmen, barbers, bakers, jailers, blacksmiths, letter-carriers, electricians, plasterers and street railwaymen (transit). In June 1955 the VTLC urged a fair employment practices act banning discrimination because of race, colour, creed or national origin.

The Victoria Labour Council of the Canadian Congress of Labour was established in 1942 and was the VTLC’s main rival. Its union locals included boilermakers (the council's leading union), dockyard and shipyard workers, beverage dispensers, drivers, laundry workers, machinists, molders and restaurant workers. Robert Patterson of the boilermakers was its first president; L.A. Hodgins of the machinists, Vice-President; S.H. Grimmond of the drivers, secretary-treasurer. Shortly after the council's formation, the boilermakers presented two key policy points: first, that delegates should run their own council without outside interference; and second, council should work primarily in the interests of affiliated locals.

During the early 1950s the council had many discussions with the VTLC over a joint labour council. They filed a no-raiding agreement at a meeting in January 1955, and also discussed such issues as the Burrard Dockyard strike in Vancouver, unemployment, six-day shopping, a bus fare increase, fluoridation of the water supply, the Public Utilities Commission, and the need for a family court in Victoria.

The Victoria Labour Council continues to be active today in the Victoria community. While older locals such as the riggers have disappeared and there are now fewer crafts and industrial unionists, there are more locals in hotel-restaurant and other public service sectors. Its present concerns include such issues as problems regarding individual unions, the environment, and the handicapped.

Access restrictions apply. Permission to view must be obtained in writing from the Victoria Labour Council.