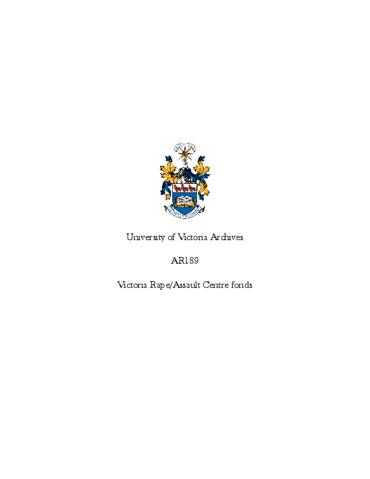 The Victoria Rape/Assault Centre was established by a group of women in 1975. It was a self-funded collective to provide rape crisis advocacy in order to help women establish and increase control over their lives, to enquire into the causes of sexual violence, to raise awareness that rape, including date rape, and assault, including "Peeping Tom" behaviour, were serious crimes. The Centre was housed at 1947 Cook Street (the building has since been demolished) and initially had two staff members. The Centre's organizational structure developed to that of a Board, with staff and volunteer groups - and committees which reflected this structure - to a horizontal collective.

In 1977 the Centre received a Local Initiatives Program grant from the federal government to produce a booklet called Rape, which was written over 6 months by volunteers and staff. Other Centre activities included presentations to high school students, women's self defense workshops and courses, on-call advocates for women who had been raped or assaulted, work with the police on development of inter-related procedures to assist rape survivors and improve the chance of charges being pressed, and improvements to hospital procedures for examination of survivors and collection of evidence. The Victoria Centre formed a coalition with other British Columbia rape centres and pooled funding applications, mostly to the province. The Centre also participated in the formation of the Canadian Association of Sexual Assault Centres and hosted a two-day national conference in 1978.

The Centre closed in 1982. The Victoria Women's Sexual Assault Centre opened in 1983 with the assistance of government funding and continues to operate at 620 View Street as a non-profit society.