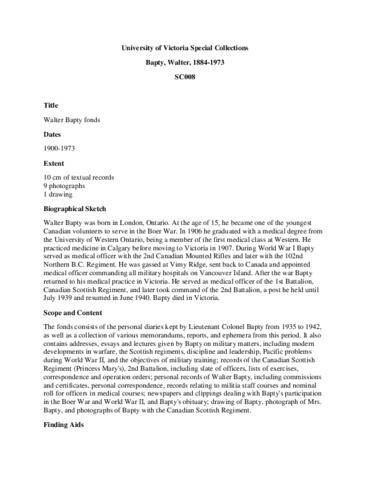 Walter Bapty, son of Harry Bapty, was born in London, Ontario on 23 August 1884. He attended the Ontario Agricultural College in Guelph and was also a member of the London (Ontario) Collegiate Institute. At the age of 15, he was one of the youngest Canadian volunteers to serve in the Boer War. In 1906 he graduated with a medical degree from the University of Western Ontario, being a member of the first medical class at Western. He practised medicine for a short time in Calgary before moving to Victoria in 1907.

Before the outbreak of the first World War, Bapty served as a captain with the 5th Canadian Garrison Artillery, RCA and as a major in the Victoria Independent Squadron of Horse (later the 31st B.C. Horse). In 1914 he served as medical officer with "C" Squadron of the 2nd Canadian Mounted Rifles. He was wounded but recovered and sent back to the front lines as medical officer of the 102nd Northern B.C. Regiment. He was gassed twice at Vimy Ridge, sent back to Canada and appointed medical officer and officer commanding of all military hospitals on Vancouver Island.

After the war Bapty returned to his medical practice in Victoria. He also served as medical officer of the 1st Battalion, Canadian Scottish Regiment, and later took command of the 2nd Battalion, a post he held until 31 July 1939 and resumed in June 1940.

Walter Bapty died in Victoria in July 1973. He had two daughters, Anne Bapty of Victoria and Laura (Mrs. D.R.) Williams of Duncan, and two sons, Harry and Dr. Leonard Bapty, both of Victoria.

The records of Col. Walter Bapty were donated to U. Vic. Special Collections ca. 1966.

Further accruals are unlikely but this inventory will be updated as necessary.

A file listing of the Bapty records was prepared by cataloguing librarian John Dell in December 1966. The biographical sketch and series descriptions were prepared in August 1991 and have been added to the file listings.