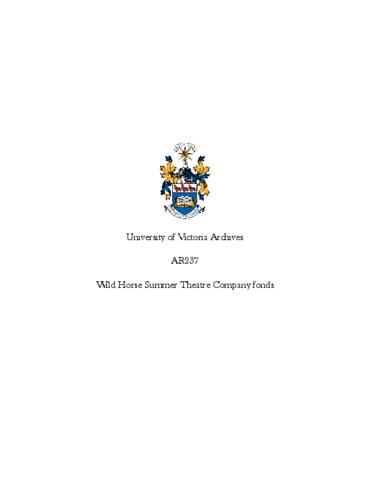 57 cm of textual records and other material

The Wild Horse Summer Theatre Company was established ca. March 1977 and ceased in the fall of 1977. Comprised of students, directors and managers from the University of Victoria Department of Theatre, the company spent the summer of 1977 at Fort Steele Historic Park in Fort Steele, B.C., performing their production of James L. Rosenburg's The Life and Death of Sneaky Fitch, or Bring ‘em Back Alive. From 25 June to 5 September, including holidays, the company staged this play twice a day, six days a week, and featured a cast of nine actors (Gillian Barber, Janice Dick, Michael Dyson, Peter McGuire, Robert Metcalfe, Ross Nichol, Brenda Seehuber, Paul van Deureen and Randy Waldie). Dr. Murray Edwards was Company Director and Tony Bukowiecki, Company Manager. As part of their agreement with Fort Steele and with the B.C. Parks Board, the company's mandate was to educate tourists about local history as well as entertain them.

The programme was less successful than hoped, as is clear from the clippings of reviews and from Dr. Edwards’s and Dr. Bukowiecki's final reports. Some viewers complained that the play was boring and too long (90 minutes) for small children to sit through. In previous summers Fort Steele had offered musicals, and many tourists disliked the change to a serious historical play. As Bukowiecki and Edwards pointed out, “We were caught in a balancing act: entertain the masses and yet keep an eye on the regulation in the permit to present ‘history’ (whatever interpretation of ‘history’ one chooses to take).” The length of the play also proved to be taxing for the actors, and over the summer the play was trimmed to 60 minutes running time. However, Edwards and Bukowiecki also highlighted many benefits, such as the valuable performing experience the student actors gained, and recommended that, among other things, the Park consider in future having a two-show repertory, which would ensure a bigger box office draw and provide more variety for the actors. They also pointed out that the Wild Horse Theatre had helped break new ground for other theatre companies in future Fort Steele summer programmes, and that “if [the local people] disliked us so much, they are bound to think anything is better than ‘Sneaky Fitch’.” They expressed the hope that their experience would help others in the long run.