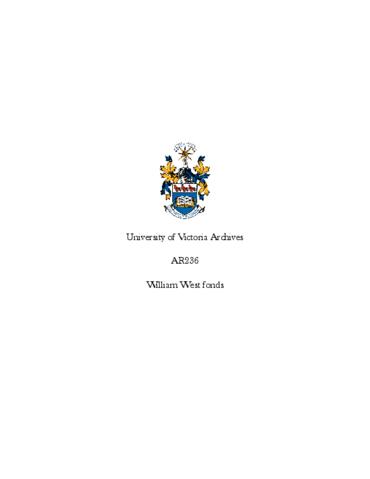 William Duncan “Bill” West was born 11 January 1921 in New Westminster, B.C. He attended Duke of Connaught High School and enrolled briefly at the University of British Columbia. In 1940 West enlisted with the Lord Strathcona’s Horse in the Canadian Army and fought in the Italian Campaign. Following the war he attended the Vancouver College of Art. He began teaching at Central Junior High School in Victoria in 1951, and also taught summer courses in art for teachers at Victoria College. Returning to Vancouver, West taught at the Vancouver School of Art in 1957, but came back to Victoria to head the Art Department at Oak Bay High School. Following this he taught theatre design briefly at Stanford University and then in 1973 was made a professor at the University of British Columbia, where he retired as a professor emeritus in 1986. In addition to his numerous set designs, West helped design the Phoenix Theatre Building and produced the mobile in the University’s first building, the Clearihue Building. In 1978 West was commissioned to design a new flag for the University of Victoria. West also designed the mural at the Chief Dan George Theatre. In 1954 West designed and built a home for his family. The house - located at 3995 Lockehaven Drive - is now a heritage property.

In 1947 West married Barbara Wilson, with whom he had three children: John, Elizabeth, and Kathleen. West died 19 November 2007 at age 86.