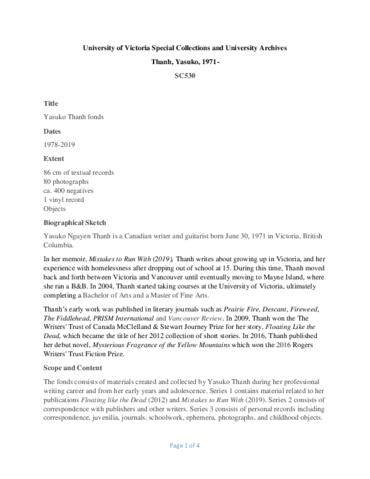 In her memoir, Mistakes to Run With (2019), Thanh writes about growing up in Victoria, and her experience with homelessness after dropping out of school at 15. During this time, Thanh moved back and forth between Victoria and Vancouver until eventually moving to Mayne Island, where she ran a B&B. In 2004, Thanh started taking courses at the University of Victoria, ultimately completing a Bachelor of Arts and a Master of Fine Arts.

Thanh’s early work was published in literary journals such as Prairie Fire, Descant, Fireweed, The Fiddlehead, PRISM International and Vancouver Review. In 2009, Thanh won the The Writers' Trust of Canada McClelland & Stewart Journey Prize for her story, Floating Like the Dead, which became the title of her 2012 collection of short stories. In 2016, Thanh published her debut novel, Mysterious Fragrance of the Yellow Mountains which won the 2016 Rogers Writers' Trust Fiction Prize.

The fonds consists of materials created and collected by Yasuko Thanh during her professional writing career as well as from her early years and adolescence. Series 1 contains material related to her publications Floating like the Dead (2012) and Mistakes to Run With (2019). Series 2 consists of correspondence with publishers and other writers. Series 3 consists of personal records including correspondence, juvenilia, journals, schoolwork, ephemera, photographs, and childhood objects.

Loose papers were arranged by the archivist, while some binders and folders were left in their original order with their natural accumulation of juvenilia, correspondence, notes, and schoolwork.

Access to the Government Records file (3.6) is subject to a research agreement to protect personal information.